In her life, Zoe Viccaji has always been surrounded by and drawn to music and performance. Her journey so far has been one of constant learning which has grown her interest in music into a passion and now an art.

Her pursuit to fulfil her dream has always come naturally; from putting up skits with her siblings in their living room as children, to playing her mothers guitar as a teenager, then onwards to college to perform with the school choir. After 5 years abroad she returned to Pakistan to start making music and performing professionally. In Pakistan we have seen and heard Zoe in many places. On Coke Studio at first as a backing vocalist and then a featured artist; with Strings for Levi’s collaborating on a reinterpretation of their well loved song Mera Bichra Yaar; in commercial campaigns for Warid, Aquafina, Clear Shampoo;  on original soundtracks for Tanhaiyaan, Josh the Film and Seedlings and as brand ambassador for Sana Safinaz. She has performed at close to 100 concerts nationwide and her live performances have also been enjoyed in musical theatre productions; Chicago and Mamma Mia.

The word ‘dareeche’ means windows and this album is a look inside the many life events that inspired these songs. Recording and producing the album with Shahi Hasan in Pakistan and Universal Music in India has been a tremendous experience. Now with the album is ready to be shared and a whole new journey begins, one that her fans can sing along with. 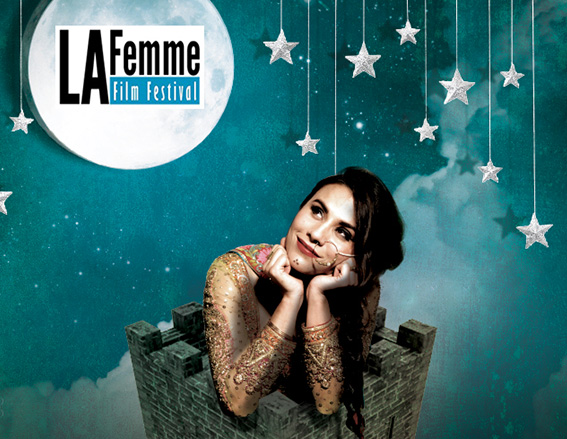 The music video for Ishq Kinara which was released earlier this year in February has made it to the LaFemme Film festival in LA! It was screened on the 20th of October for an audience from all around the world. This is a huge achievement for Zoe Viccaji and Director Meher Jaffri; as their work is being recognised internationally, and the video is being seen in the same category as film. The video shows Jaffri’s directorial brilliance and may be likened to a short film in its treatment and quality. She has just returned from a Fullbright scholarship in New York, and is already working on exciting new projects. The film was shot by Mo Azmi who has worked with Viccaji on two other music video, with production design by Saqib Hayat making the beautiful sets that you see. It features two budding actors from Karachi, Sunil Shanker and Kashif Hussain, with other actors an dancers Cyril James, Shabana Hassan, Sabiha Zia, Vajdaan, Anwaar Sheikh and many more appearing in the credits of the video. “Ishq Kinara is a song that is very close to our hearts, one that speaks on a universal level of the experience of love and how we may lose ourselves in it. Ishq Kinara is about the realization that love stems from within, and instead of looking outward for love and approval, we must first look within out selves.” Says Viccaji. The project is an extension of Viccaji’s fascination with musical theatre and is a fun, upbeat and humorous piece. The song was first heard through Coke Studio and continues to be one of her famous numbers. Viccaji says this is one of her favourite songs, the verses are composed by her, and the chorus has been adapted from an old Turkish song Uskudara Gideriken. The music for the video was produced by Karim Barolia and Ahsan Bari. Other team members who made this possible: Production designer Saqib Hayat. Line producer: Carol Ann Noronha, AD Shajee Hasan and Umaima Ahmed. Associate producer Kamal Khan. Production manager :Sara Ashraf. Production coordinator: Zoha Husain. Production assistant: Nabeel Ahmed and Anwaar Sheikh, Art directors Aamir Farsi and Cheryl, Art assistant: Talha Kehar. Special effects makeup  Almitra Mavalvala. Stylist: Mir Dilawar   You can watch the full video here: https://youtu.be/163Qw8SkfGA 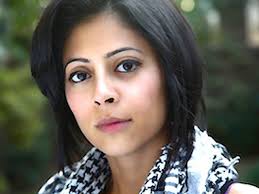 ISHQKINARA- Director Meher Jaffri shares her notes with us

April 14, 2017
I wanted the video to be a fun; whimsical and fantastical take on the ‘illusion of love’ and the idea of ‘losing yourself in love’ that the song speaks of in more poetic, almost spiritual way. Hence, the concept of musical theatre, all very flamboyant and fantastical in its form – the theatre itself, the ultimate show or illusion of reality. I wanted to go further and deconstruct the concept of the theatre, that is, to reveal the mechanics and the machinery behind the grand illusion (some meta- theatre, if you will), in order illustrate our playful take on the message: we are ultimately our own heroes! From this was born the three worlds of the music video, all of which have Zoe taking up different roles:
1. On-Stage Drama: The first part of is the actual drama in the ‘play-world’ that’s happening on- stage. I wanted to pay homage to the genesis of film and video as the form of storytelling as we know it, going back to vaudeville theatre and silent cinema with it’s exaggerated and unapologetically melodramatic style that just makes for good entertainment. The play begins with the classic “girl meets boy’ story, but leaves conventionality as we progress, bringing us to a more empowered take on the ‘damsel in distress’ story.
3. Audience: The fantasy is not complete without the audience who come to submit themselves to the illusion. This is a playful take on our willingness to get lost in the illusion of stories, theatre, and in the case of the song, love. The audience submits itself to the play world as the lights go down, are engrossed in the action on-stage, laugh at the comedy, get caught up in the suspense and are thrilled at the heroine’s triumph. Of course, no piece of meta-theatre is complete without it’s meta-jokes, so we gave Zoe some triple role action within the audience:
Zoe as herself – Zoe plays herself, coming to the theatre to watch a play. Some inside jokes include the fact that she has come with Sunil, the real life actor who plays the character of the villain in the play; and she sits next to a supposed stranger Kashif, the actor who plays the hero onstage. She also interacts with the Fanboy and the Aunty who are noisy patrons of the arts. Zoe as the Fanboy – this little twerp is an excited fellow, fully engrossed and heartily enjoying the play when he notices Zoe Viccaji in the crowd near him! He can’t contain his joy as he disrupts his friends’ attentions around him to tell them of this celebrity sighting. His cooler friends can’t sush him up as he begs them to pass along his Zoe Viccaji artwork covered backpack to get her autograph on. They must comply and he is overjoyed when she waves at him and he gets that coveted autograph. Zoe as the Aunty – No play-watching experience is complete in Pakistan without that Aunty who bamboozles her way into the performance late, scarfing down heaps of snacks, who’s phone never stops ringing and who promptly falls asleep, snoring her way through the show. She’s generally a bit of a nuisance for her fellow audience members.
4. Epilogue: There is bonus epilogue after the credits that show Zoe as a sweeper, clearing up the mess left after the show (with its sets and props looking ridiculous out of context) and telling us (and the Aunty who sleeps well past the curtain call) that the show is over! Above all we wanted to have fun with the video and while the more discerning eye might appreciate the meta-theatrical take on illusion, as well as the finer details hidden in different scenes (drawing people back to multiple viewings hopefully) – the more basic viewer will be heavily entertained with the grandiosity of the sets, colours, dancing and drama; and the slapstick humour onstage and of Zoe in her hilarious alter-egos offstage.
x Meher Jaffri 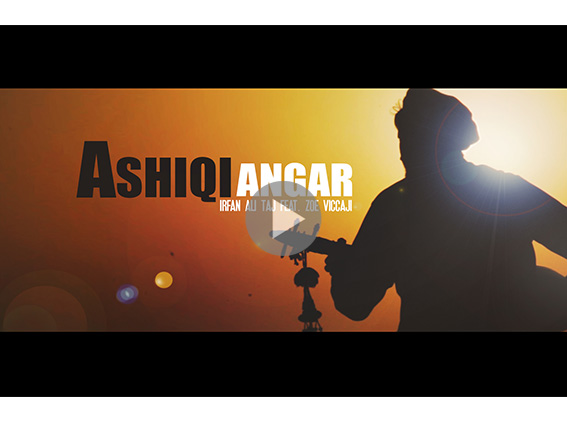 MARCH 2016: While working on a project together, singer-songwriter Zoe Viccaji and actor-director Adnan Malik came across 25-year-old Irfan Ali Taj whose vocal abilities and slick playing of the rubab and guitar left them more than impressed. Months later, Viccaji and Taj were ready to put out their first ever collaboration together, Ashiqi Angar.

Talking to The Express Tribune, Taj said the song was written by a fellow Chitrali songwriter, Mir Saleem, who is part of Taj’s former band, QashQarian. “The song really is the first to come out from the plains of Chitral into the mainstream. It has brought our music to the fore,” he said. The Urdu lyrics have been penned by Abdullah Haroon and Viccaji can be seen crooning to the lines in the video.

With the Chitrali and Urdu lyrics both alluding to a longing for the beloved and the composition deriving heavily from folk music of the highlands, the video has ironically been filmed at a beach somewhere along the coastal part of Pakistan. Viccaji said the video, directed by Junaid Mustafa, was conceived on a shoestring budget. “On the other hand, the response it has received is amazing,” she said. Viccaji has every reason to believe Taj will soon make it big. “He has put in genuine effort. His heart is in the right place. I am sure more great songs will be coming out from his end.” The song has been produced by musician Mubashir Admani.

According to Taj, the song delves into two different philosophies. “The Chitrali lines signify the concept of ishq-e-majazi whereas the Urdu lyrics denote ishq-e-haqiqi. The song talks about how love does not kill you but makes you stronger, making you capable of achieving bigger things in life,” he said.

The upcoming musician feels very strongly about the literary tradition of his part of the world. He plans on reviving classical poetry inked by writers from Gilgit and Chitral through his music. “Not only do I want to highlight the struggle of these people but also to underscore the historical importance of the region.” Taj said he wants others to see Chitral the way he has seen it.

With Ashiqi Angar already out, Taj is currently working on forming another band called Siachen. He has plans of releasing another single,Teri Talash, in which he will experiment with dhol, shehnai and other Eastern instruments. In his own words, it is a “masterpiece in the making”. 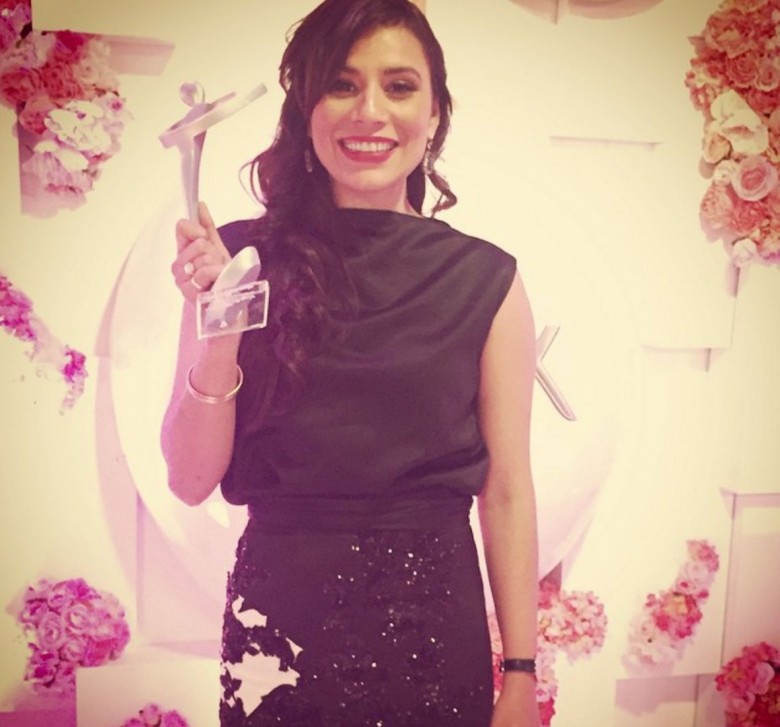 Zoe Viccaji’s debut album bagged two awards on both sides of the border!

Dareeche was awarded Best Mixed Album at the Indian Recording Arts Awards on May 30th in 2015. The pretegious IRA Awards focus on bringing to light under-appreciated technical expertise in music, and in particular recognising the work of independent artists. Zoe took to Facebook to acknowledge and celebrate the win: 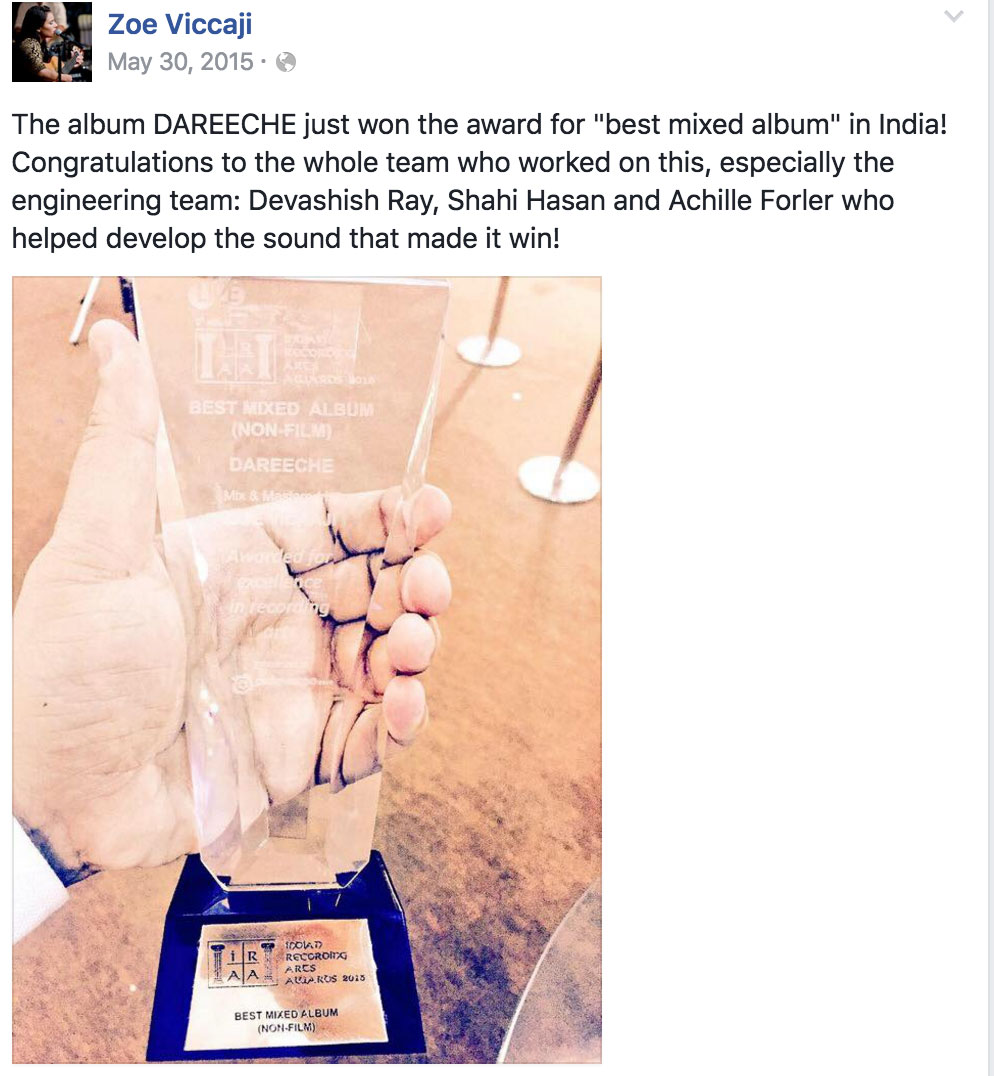 Later in the year Zoe Viccaji bagged another big win at the Lux Style Awards for Best Album in Pakistan, and returned with her first LSA trophy, after being nominated three times in previous years. 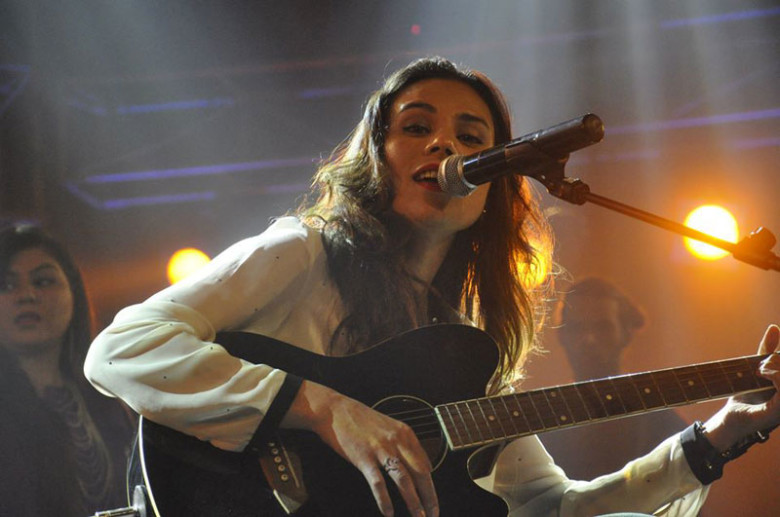 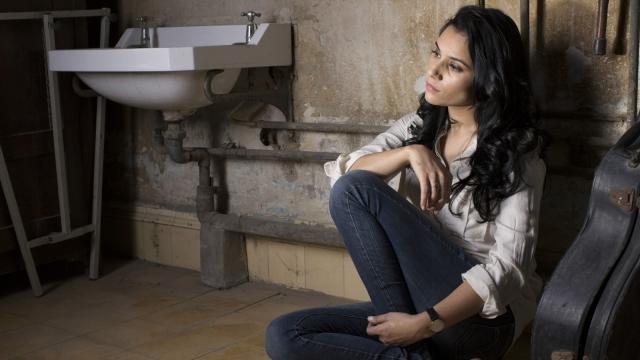 ZOE VICCAJI ON HER ALBUM RELEASE

Karachi-based singer/songwriter, Zoe Viccaji, is most well known as the playback singer for the band that supported the internationally acclaimed Coke Studio, Pakistan. Born to a Parsi father and a Christian mother, Zoe started writing and singing her own songs as early as the age of 15.

END_OF_DOCUMENT_TOKEN_TO_BE_REPLACED 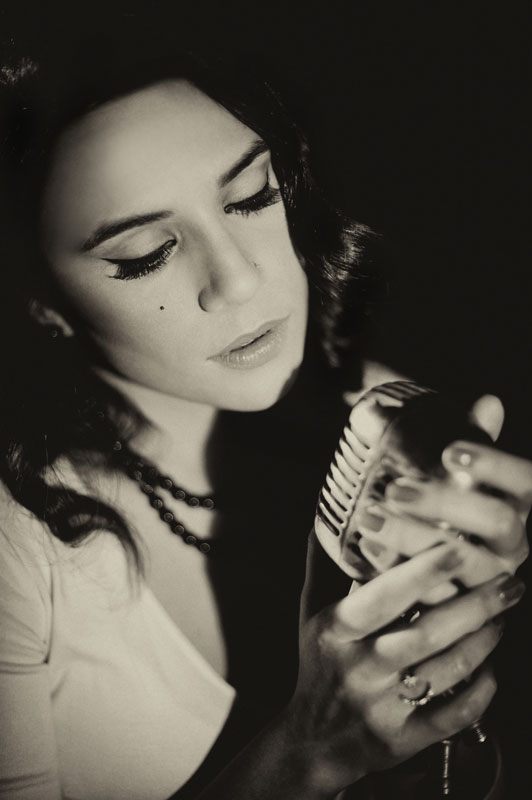